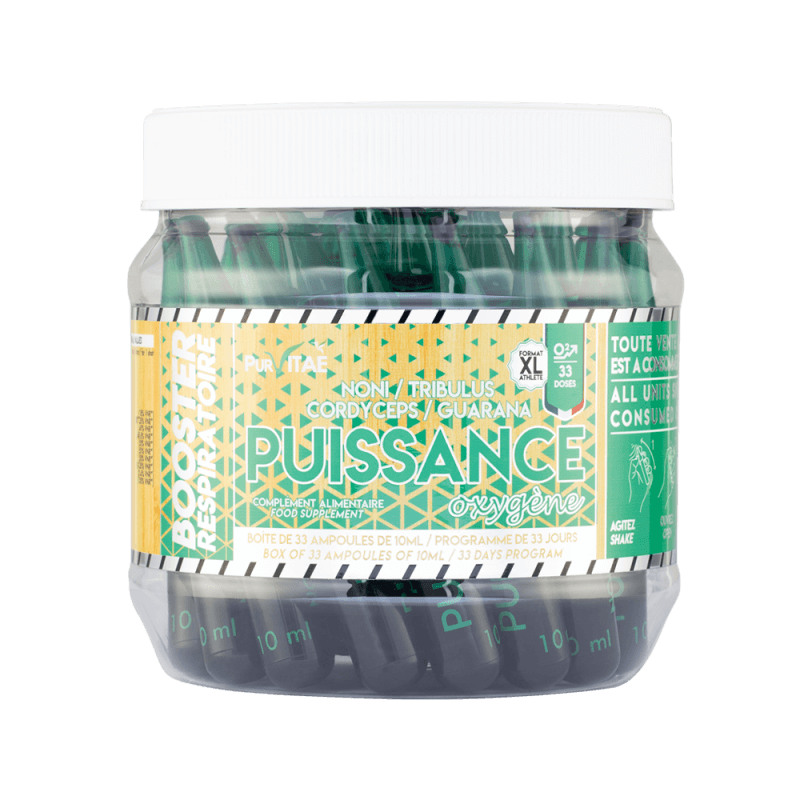 It ensures the exchange of oxygen to the brain, heart and muscles

It supports a good musculature

It decreases generalized fatigue caused by regular or intense workouts

It contains amino acids that act against the glycation of proteins

PUISSANCE Oxygen is a unique booster. Firstly due to its recyclable bulb format and secondly due to its usefulness in supporting the respiratory system and toning muscles during physical effort.

You will find in PUISSANCE Oxygen:

- Cordyceps: Champion of the traditional medicine of Nepal and Tibet used to treat circulatory problems and stimulate vigor.

- Guarana: Amazonian fruit with the highest caffeine content. Known for years as a physical and mental stimulant in case of fatigue.

- Tribulus Terrestris: Plant cultivated in Africa and the hot regions of America. Traditionally used by athletes for its fortifying action.

- Noni juice: Extracted from a plant called Morinda, it has been used for years in Tahiti thanks to its therapeutic properties. It is rich in xeronine, a molecule that would have an invigorating effect on muscles according to the studies of Dr Heinicke in 1970.

- Beta-alanine: Precursor amino acid of carnosine, a molecule acting on muscle power according to Suzuki's studies in 2002.

- Arginine: It participates in the production of creatine, the substance responsible for oxygen transport in the muscle.

- Magnesium: Mineral recognized by the general public to reduce fatigue.

Thanks to its intelligent composition of Iron, Puissance Oxygen ensures the exchange of oxygen to the organs, such as the brain, heart and muscles.

Indeed, iron is involved in the composition of haemoglobin (red blood cells) - a protein that maintains good oxygenation of the body. In athletes, a lack of oxygen results in a feeling of fatigue, accelerated heartbeat and pulse, shortness of breath, difficulty thinking during an event, etc. Therefore, having the correct level of iron in the body is important for the proper functioning of the body.

It reduces fatigue during exercise

The plants present in PUISSANCE Oxygen help to reduce generalized fatigue caused by regular or intense training. These plants also help to reduce muscular acidosis - a very unpleasant burning sensation in the muscles that often occurs during high intensity exercises. This reaction is not without consequences because it interferes with muscle contraction and therefore with the production of strength.

It supports a good musculature

The amino acids present in this booster, such as beta-alanine and arginine, together with vitamins and minerals, act against protein glycation in the muscles.

The glycation - fixing sugar in proteins - is a natural reaction that occurs throughout our lives. However, if these reactions accumulate, they can lead to premature aging of the tissues and promote the formation of free radicals causing damage.

With a 10ml dose (one ampoule), PUISSANCE Oxygen will bring to your body 300mg of cordyceps, 100mg of dry extract of Guarana 8/1 100mg of Tribulus Terrestris and 600mg of Noni juice as well as all the battery of Vitamins and Minerals that you will need to boost your performance during your WOD.

Composition for one ampoule

It cannot replace a varied and balanced diet. Keep out of reach of children. Do not exceed the recommended daily dose. Store away from light and keep in a clean, dry place. Not intended to children, pregnant or breastfeeding women.